When I received the email confirming my Salt Lake City hotel booking, it included a link of “local things to do”.  When I clicked that link I was let to a Viator link with local tours.  I registered for the 5 hour Great Salt Lake and Copper Mine tour for $69.  This ended up being a GREAT investment but I’ll warn you, if you don’t like narrow roads with sheer drop offs next to your van… you may want to opt for just the Great Salt Lake tour which is less money and less “adventurous”

The tour bus is run through City Sights, a local tour company that runs tours through much of Utah. They pick up at all the local downtown hotels, so getting on and off is super easy.

The tour bus held maybe 30 or so people, it wasn’t quite full so there was plenty of room.  They had the air on so it was also very comfortable for a 97 degree day.  The tour guide was very knowledgeable and we learned a lot of interesting facts on our drive to the Great Salt Lake.  Some of those facts I’ll share on other days as part of other posts.  She made a few quick stops to point out areas that are normally bird watching areas during the waterfowl migration.  Unfortunately we missed the end of the migration period by at least a week so there wasn’t anything interesting to see on that front.

When we were nearly to the Salt Lake Marina, we stopped for a view of the Saltaire.  This building was actually a 3rd version of it as the first burned down and the 2nd flooded.  This 3rd is used as a concert venue.  Originally it was built as a luxury resort area for visitors that wanted to enjoy a “float” on the lake.  Of course with all the salt water it’s easier to just float along. 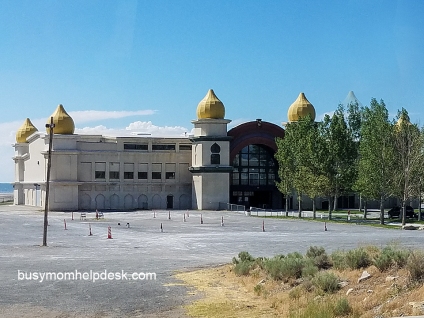 We saw the pilings from an original dock : 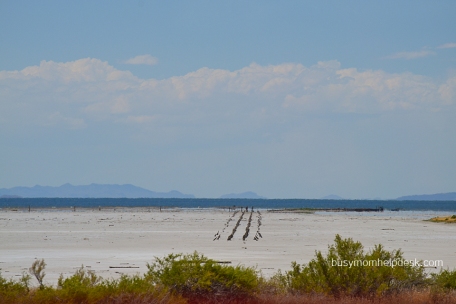 We continued the drive to the Salt Lake Marina where they had an indoor visitors center with drinks and snacks, souvenirs as well as a short video on the Salt Lake and surrounding area.  There was a little mini museum as well as a penny machine (yes I made a penny!  It’s my favorite “cheap” souvenir.)  Outside was the marina with boat slip and some great short trails leading to different lookout areas.  Be prepared because the area is quite stinky from the dead/decaying brine flies.  The flies are EVERYWHERE, although they don’t swarm or bite at all.  The only things that grow in the Great Salt Lake area are algae, brine shrimp and brine flies.  The brine shrimp (these are the sea monkeys in our favorite childhood “toy”) and brine flies eat the algae, leaving a pristine blue lake color. 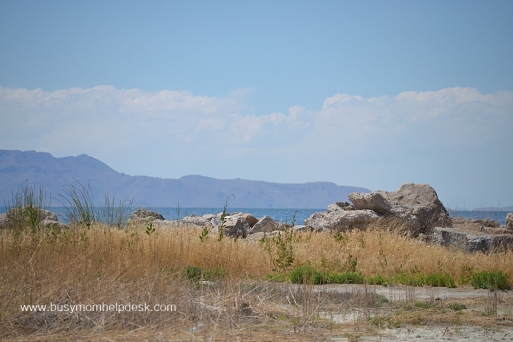 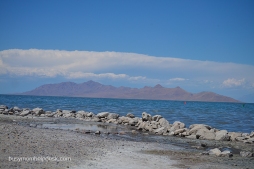 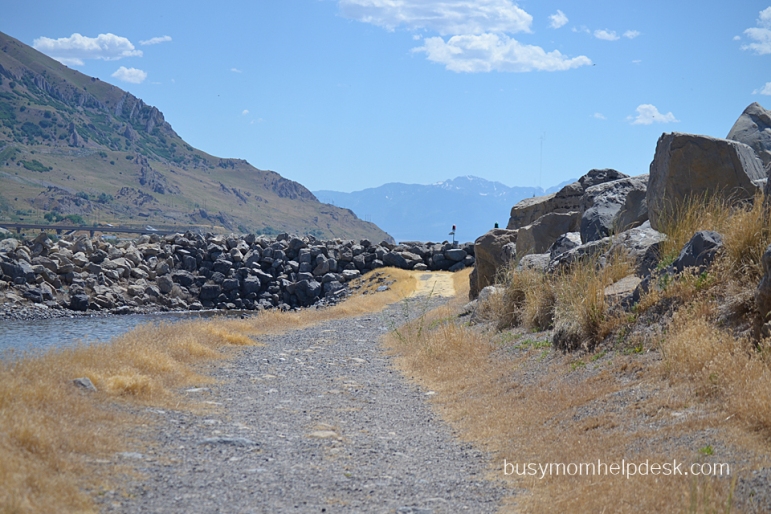 After our 45 minute excursion at the marina a much smaller bus (about 11 seater) arrived to take those of us that also signed up for the Copper Mine Tour, on our drive.  The rest of the group got back in the original van and headed back to be dropped off at their hotels.

This is where it got interesting.

We made a pit stop at a gas station for a restroom break and to buy snacks for the trip.

Once you get out of town and start up the canyon road, it starts to narrow down a bit.  There are areas on the trip that are really narrow… like one car wide.  If you come to another vehicle, one backs up until there’s space for two to get through.  The sides drop off in areas.  Like… straight down.

The view though is beautiful. 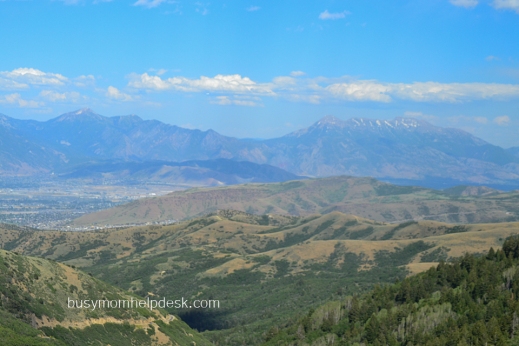 When you hit the last 2 miles of the canyon road, they’re all dirt and pretty steep… so the air conditioner was shut off to make sure the bus had enough power to get up to the top.

We did make a quick stop along the way… in addition to a memorial marker (Yikes!!!  A woman crashed her vehicle in the canyon and a marker was placed in her memory) there was some beautiful views.

Once we made it to the top, though, the craziness of that drive didn’t’ even matter anymore (did I mention how incredibly bumpy that last 2 miles was??? whoa) 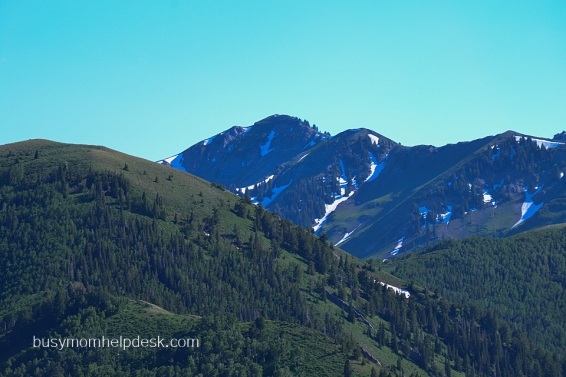 Then of course the whole reason for the trip was to see the largest open-pit copper mine in the world… the Kennekot Copper Mine.  Read more about it >>here.  The visitors center closed a few years back after a landslide within the mine, as a safety precaution.  Currently the only way to view the mine is through this tour. 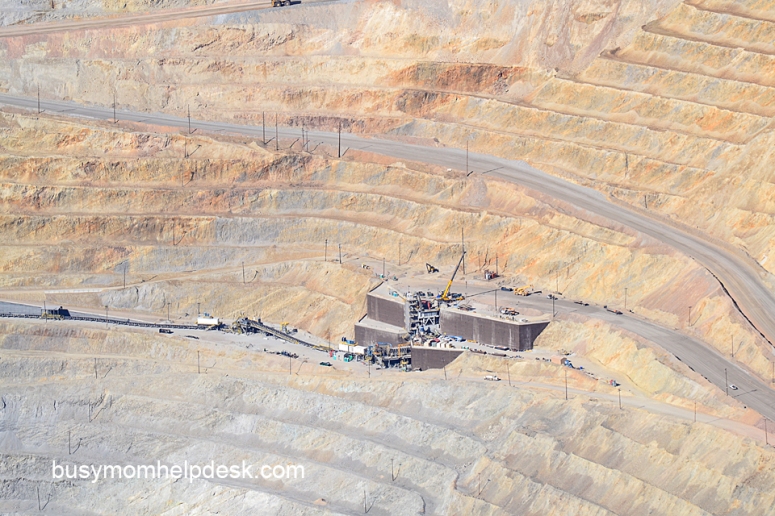 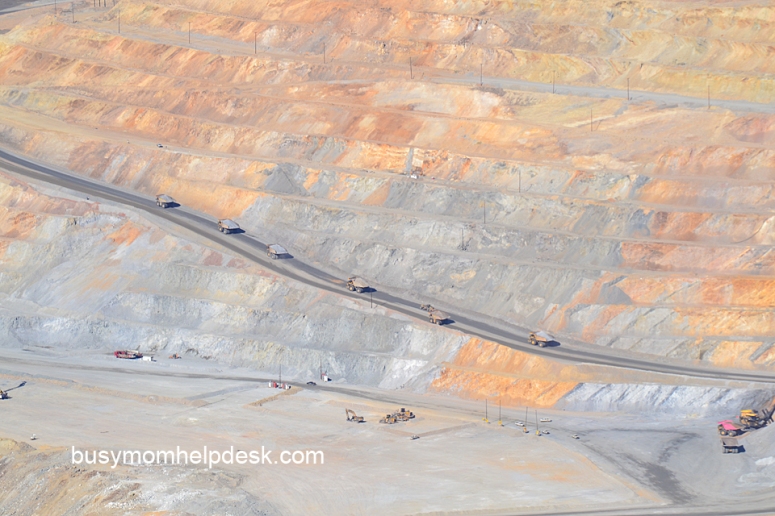 The tires on the trucks above are 12 foot tall… just to give perspective to this magnificent place.  These photos only show a small section of the mine… it basically looks about the same in all directions if you were standing within the mine.

So… after about 15-20 minutes at the top of the canyon… it was time to drive back down.  The only story I have to share…is that it’s one thing to make the drive up… the drive back down is altogether different when you can physically see how narrow the roads were that you took up.  Remember how I said this tour was “adventurous” ? 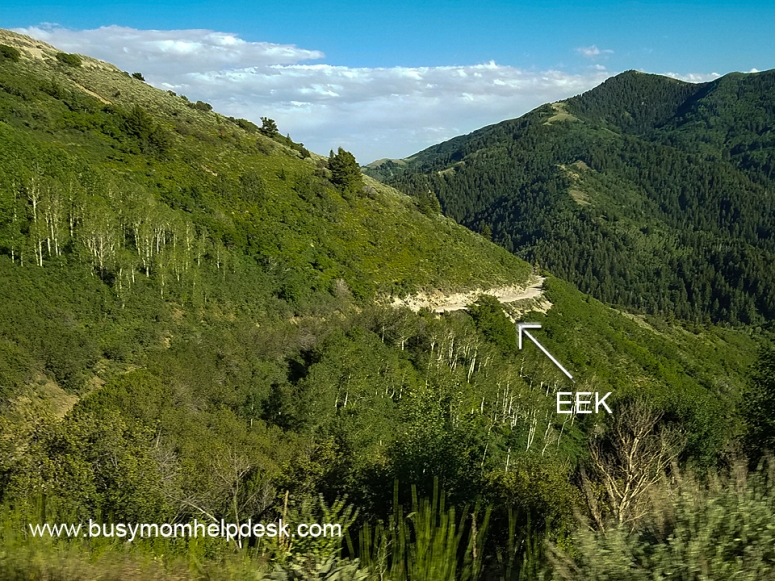 Whether you choose to just visit the Great Salt Lake, or to be adventurous and head to the top of the canyon, I highly recommend the tour I took.  The drivers of both trips were very knowledgeable and careful drivers.  I learned more about Salt Lake City on this 5 hour tour than I did in the five days I spent in town.

Here’s a link to the tour info>> click here

Thanks for making in through my story!  It was a lot of fun and so beautiful!